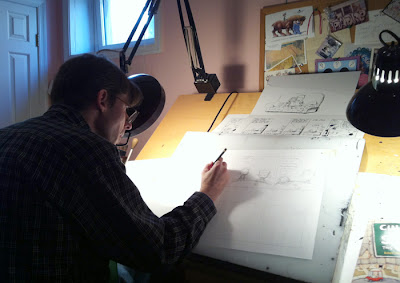 A photo I snapped of Richard while I was visiting his home earlier this year. He was at his drawing table teaching me how to draw the Cul de Sac characters.
Photo by Stacy Curtis.

My cartoonist pal Richard Thompson is a lucky man.
On Friday, it was announced he is ending his comic strip, Cul de Sac, because as he put it "Parkinson's disease is horribly selfish and demanding. A daily comic strip is too and I can only deal with one at a time."
Since then, on Facebook, Twitter, every cartooning site and blog, praise has been heaped upon him as if his eulogy is being delivered by one fan and fellow cartoonist at a time.
And I say he is a lucky man because he gets to sit quietly in the back row (alive and not dead) and feel the admiration, the love and respect we all have for him.

As you may know, earlier this year, Richard asked me to help him with the inking of Cul de Sac.

I never felt inking Cul de Sac for Richard worked. It was like going into a theater to see Jerry Seinfeld do stand-up and watching Steve Martin deliver his lines.
And that's what it felt like. Every time I sat down at my drawing table to ink Cul de Sac, I could hear a narrator's voice say, "For tonight's performance, the part of Richard Thompson will be played by his understudy, Stacy Curtis."

I felt the inking I did was adequate. There were no huge missteps, but at the same time, the strip which beautifully radiated from one source had been compromised by having someone else's hand in it.

For Richard, the writing, drawing and inking of the strip was all one process for him and once it wasn't, there was a disturbance in The Force.

It became apparent hiring an inker doesn't cure Parkinson's disease.
The strip went into reruns more often than not and the time came for difficult decisions to be made.

So, for my turn to stand at the podium and deliver my segment of Richard Thompson's eulogy, which really isn't a eulogy at all because Richard Thompson is still alive and far from dead, this is what I would like to say:
"Like many fans and fellow cartoonists, I will miss Cul de Sac. But Richard made the right decision. Focusing on his health now, means we will have many more years of his beautiful lines to drool over later.

Richard is amazing. As an cartoonist, he makes us want to be better cartoonists. As a writer, he leaves us in his dust and as a friend, he has brought us all together to help him fight the disease that has taken Cul de Sac away from us.

During my visit to Richard's home earlier this year, I noticed a banjo sat in the corner of his studio. As Timmy Fretwork has shown us, You can't tie down a Banjo Man.

Richard, I hope you are feeling all the admiration, love and respect we're all piling on you. Good luck with your treatments and we're rooting for you all the way."

Labels: Richard would have put a funny line right here

Oh my gosh, Stacy. You have made me cry all over the keyboards. I didn't know anything about Cul de Sac ending. I haven't been home much, recently, with a new job etc. and out of the loop. What sad news and what you wrote was so eloquent. Just perfect.

Wonderfully written, but you're too hard on yourself. I thought your inking itself was a great tribute to Richard's art.

Thanks for the part about me not being dead yet, Stacy! People need to be reminded of this. Especially me.

Great job Stacy. I especially appreciate your point about distinguishing the end of Cul de Sac with the end of Richard's career. I will miss Cul de Sac, but I look forward to the work that I believe is to come.

What ksiers said. I thought you were terrific. But anyway, this is a wonderful post. And one of these days we are going to nail Parkinson's.

"It was like going into a theater to see Jerry Seinfeld do stand-up and watching Steve Martin deliver his lines."

Although, that might be pretty cool - the next night they could swap.

I think you've done a very admirable job inking the strip. You gave it a new lease on life while producing some beautiful cartooning. You deserve major credit for that. All the best wishes for Richard. The important thing now is that he stays as healthy as possible.

Just to make sure everybody knows- Stacy did a masterful job inking my scruffy-looking roughs and I'm grateful he was there to keep me going.

And I think he should do a strip all his own. Something about a banjo pig.