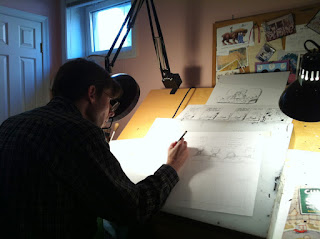 This is a photo I snapped of Richard drawing in 2012 his studio.

A year or so after meeting him for the first time, I found myself in Richard Thompson’s studio watching and listening as he taught me how to draw his comic strip “Cul de Sac.” I sat next to him as he walked me through the shape of Alice Otterloop’s head, the shape of Petey’s nose and we talked pen nibs, inks, paper and what pie he likes. I felt honored that he would allow me to work on his strip with him. So much so I offered to bring coffee and doughnuts into his studio every morning, despite the 700 mile commute and the fact I’d probably eat all the doughnuts on the way there.

Anyway ... I will never forget sitting with Richard in his studio receiving the education of a lifetime. Watching the master draw and talk about his process was surreal. His artwork permeates my work. There are small pieces of Richard Thompson influence that I have left in my drawings as a tribute to him. It will always be imitation, but it’s my way of saying, “Thank you.”

Last night as I raised a toast to Richard, I looked around and realized his influence is everywhere in my studio. His books on my bookshelves. Richard gave me a handful of his pen nibs. I still ink with some of them, others (I will never use) have a special place in my stockpile of art supplies. Original Richard Thompson artwork hangs on my walls. There are still files on my computer of the “Cul de Sac” roughs Richard sent me to ink.   I also have a folder on my computer of the photos I took during my visit to the Thompson compound. Photos of art hanging on the walls in the house. Photos of his Reuben Award. Photos of his studio. Photos of him drawing. And a couple photos of the backyard view out his bathroom window. When he asked why I took those I said, “Because I want to know what you’re looking at every time you take a piss.” He laughed.

Richard was loved. He had a circle of friends who would have jumped on a grenade to protect him. He knew his work was loved and he left behind a massive amount of work that will inspire people Richard will never get to meet. If you’re not aware of his work, look it up, buy his books, find a comfy place to read and be prepared to have your socks knocked off.   Literally. Knocked right off. By Richard Thompson. 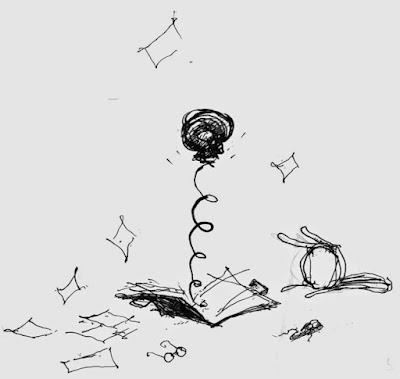 One of the many links below is if you choose to donate to the Michael J. Fox Foundation in Richard’s name. Nothing can bring Richard Thompson back, but we can work to prevent this loss from ever happening to someone else.

My family's condolences to Richard's wife, his children and his many, many friends and admirers. Big hugs to you all.

A link to Richard's books.
(Buy them wherever you feel comfortable buying books.)

The Art of Richard Thompson documentary.

Sketch of a Shopper 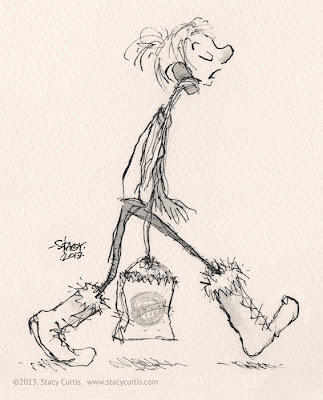 Wow, I have been neglecting the blog lately, eh? I need to change that.
This was done while sitting around at the mall sketching shoppers.
Posted by Stacy Curtis at 11:56 PM No comments: 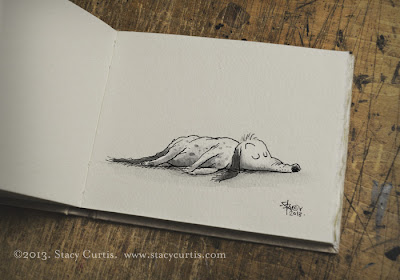 "To Be a Cat," a middle grade novel I illustrated, was released today.
I dedicated the cat book to my dogs, Derby and Inky. :-)
You should buy this book.

Posted by Stacy Curtis at 1:21 PM No comments:

Labels: To Be a Cat 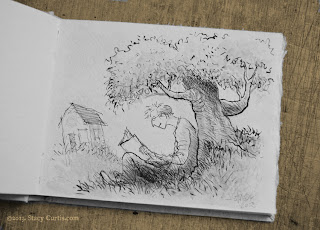 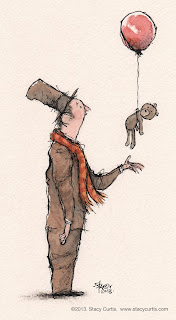 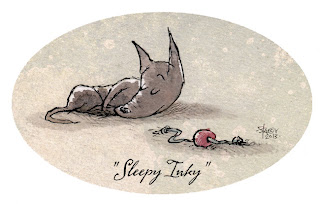